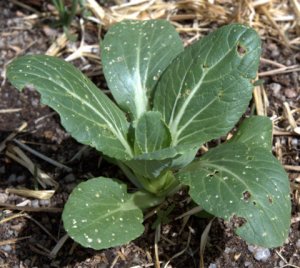 Our family loves bok choy, so I always plant at least one block of the baby variety. And every year I harvest bok choy that looks as if it’s been peppered with buckshot. I can explain that I washed the leaves and they’re perfectly safe to eat, but really—who wants to eat leaves that were eaten by something else first? Ewww.

The culprit behind all those holes is an aggravating insect called a Flea Beetle. No, they aren’t really fleas, and they only bite plants, not people. If you look closely, you’ll see they’re shaped like beetles (fleas are vertically flattened). Still, they are very small, dark brown to black, and they can jump—just like fleas. And just like fleas, they can drive you crazy. 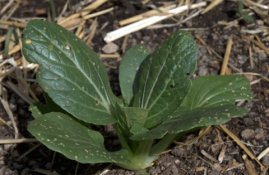 Colorado is home to a number of flea beetle species. Some prefer to feast on nightshades—tomatoes, potatoes, peppers, and eggplant. Others have a taste for spinach. And the Cabbage Flea Beetle dines on crucifers, including broccoli, cabbage, kale, and my beloved bok choy. Can you see the flea beetles in the photo at left? There are at least three. (Click on it to enlarge the image.)

Adult flea beetles overwinter in the soil, under mulch, or in other protected spots and emerge when the weather warms to lay their eggs near the roots of plants. The larvae that emerge eat the tiny new roots and root hairs. They’re so small, they don’t do much damage at that stage. (An exception is the Tuber Flea Beetle, which can damage potato tubers.) After a month or so, the larvae pupate and emerge as adults, ready to search out and destroy your garden. Depending on the length of the growing season, flea beetles may produce two or even three generations per summer.

It is their tiny size and extraordinary gymnastic abilities that makes flea beetles so hard to control. There are several approaches to consider.

I’ve had the best results with creating a physical barrier. A polyester row cover, such as Reemay, will exclude the adult beetles. However, it must be in place before the adults lay their eggs, to keep the larvae from just hatching inside the barrier. Often, this is about the same time you’re setting out seedlings, so the timing can be tricky.

Cultivating the soil immediately prior to planting, and again a week later, will expose larvae to predators. Or, try laying down a thick mulch that will interfere with the adults’ ability to reach the soil to lay their eggs.

There are several species of braconid wasps and tachinid flies whose larvae eat flea beetle larvae. The adult wasps drink nectar, so you can welcome these tiny predators to your garden by growing flowers in the carrot family (think cilantro, parsley, etc.). Don’t worry, none of these beetle-eaters sting or bite people. Besides, some are valuable pollinators.

Another solution is to plant a trap crop. My bok choy is so delicious to flea beetles, they tend to leave my cabbage and broccoli alone. Radishes are supposed to be even more tempting, so by planting radishes, I might be able to lure these pests away from the bok choy. I haven’t tried this yet, but I certainly plan to. Once you harvest your veggies, you also pull up and compost the trap crop (and you can eat the radishes)—there’s no sense encouraging the beetle population.

You can hide your susceptible veggie plants among herbs and strongly-scented flowers. The idea is that they beetles won’t notice them, since they find their host plants by smell. While it sounds plausible, the effectiveness of this approach has not yet been proven by research.

Sometimes timing is everything. Experts recommend scheduling a planting so that the seedlings are set out between beetle generations. I haven’t figured out exactly when this lull occurs, but a call to the local extension office might prove helpful.

And do set out seedlings. Beetle damage is most serious to young plants, as they need every square inch of leaf surface to get started. The bigger the seedlings, the better their chance of surviving to produce a harvest.

What about insecticides? Colorado State Extension recommends carbaryl (aka Sevin) for control of flea beetles. It has to be reapplied frequently to protect the new leaves on rapidly growing plants, and of course it kills indiscriminately. Since I grow my veggies partly because I want to avoid this sort of chemical, I haven’t tried spraying.

Dusting the leaves with diatomaceous earth has proven to be an effective beetle control. The microscopic diatom skeletons get stuck in the beetles’ jointed exoskeleton, immobilizing them. Diatomaceous earth is perfectly safe for anything without a chitinous exoskeleton, so you don’t need to worry about hurting the birds or the humans.

Finally, just to be fair, I should point out that not all flea beetle species are “bad bugs.” In fact, flea beetles in the genus Aphthona love to chew on leafy spurge, an invasive weed.
___
For more reading, see the CSU Fact Sheet on Flea Beetles, by Whitney Cranshaw.