To refresh your memory, here is the photo from April’s Bird Quiz. It was taken in Colorado during the month of May. Don’t read any further if you want one last chance to identify this bird. 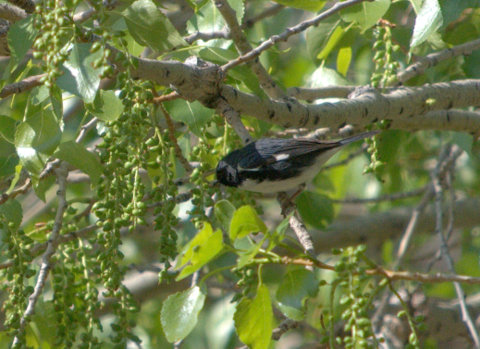 Ah, May—I can hardly wait! No other time of year has so much birdy activity. As the month begins, migrants are migrating. By the time June draws near, territories have been claimed and defended, nests are being built, and eggs are being laid. Dawn birders are greeted by a deafening chorus of song. This is about as good as it gets!

I’m always amazed that birds are able to find their way over vast distances, often back to the exact spot where they hatched, or successfully nested the year before. It seems such an incredible feat that I’m not surprised when a few individuals wander off course and end up somewhere they hadn’t intended to go. Appropriately, we call these lost birds “accidentals.”

Searching for accidentals is a convenient way to add to one’s life list. Instead of traveling across the country, or even to another continent, you can hang around home and let the birds come to you. Of course, it’s difficult to find an accidental on your own, but there are online groups where rare bird sightings are posted. You just monitor the news feed, then head out to see what someone else happened to find. For rare bird sightings in Colorado, Check out the Google Group “Colorado Birds” or the ABA list for Colorado.

Now back to the bird shown above. This isn’t the greatest photo, but we often don’t get picture-perfect views in real life. At least we can see most of the bird. It’s obviously in a tree (as opposed to skulking in the underbrush or paddling around on water), and is fairly small. The plumage is white underneath and black and blue on top, with some potentially helpful white marks on the wing and around the head. If I squint, I imagine I can see the beak, but it’s really hard to tell. In any case it must be small, since a large beak (like on a Thrasher, for example) would be clearly visible. We can see the legs—nothing remarkable there.

Starting with the most obvious field marks, we turn to a field guide. Which species are blue-black above and white below? I stick my fingers in the pages for Black Phoebe, Eastern Kingbird, VioIet-green and Tree Swallows, Black-throated Blue Warbler, and the Slate-colored subspecies of Dark-eyed Junco). Good thing that’s all I can find, as I’m running out of fingers!

Now for the more subtle field marks and other information. It’s easy to rule out the Black Phoebe, as the white area on their undersides is small, limited to their lower belly. This bird is white from head to tail. Eastern Kingbirds are much larger than the bird in the photo, they don’t have white on the wings, plus they tend to sit out on a branch in plain view, not hide in the foliage.

The swallows are a bit trickier, as there’s a close resemblance. However, they too lack the extra white markings seen in the photo. Even though, keep them in mind. Sometimes birds lose the melanin that colors some of their feathers, resulting in white spots that normally would be dark—a condition called leucism.

Now we come to the warbler. It has the right size and shape, the colors match, and so do the white marks! It’s looking good but let’s check out the Junco, just in case. Like the Black Phoebe, the Junco hash too limited a white area.

We come back to the warbler. It really does look just like the photo, but there’s a big problem—Black-throated Blue Warblers aren’t supposed to be in Colorado. Instead, these warblers winter in Central America, then fly east of the Mississippi River to nest in southern Canada, the northern states from Wisconsin to Maine, and down the Appalachians to Tennessee. Colorado isn’t even close.

We’re right to hesitate when we ID a bird out of its normal range. We’d better be very sure. As Sibley states, “Very rare visitor from eastern North America.” As the person at the receiving end for our Audubon chapter’s email, I get lots of ID questions from the public. Usually they’re all excited, sure that they’ve found a rare bird—and usually it turns out to be something much more common instead.

However, rare birds do occur. This bird was indeed a Black-throated Blue Warbler, and here it was in a regional park in El Paso County, Colorado. Happily, the park is frequented by birders, someone spotted the bird, and word quickly spread—hence my photo. Here’s another one (no better, unfortunately) of the same bird: 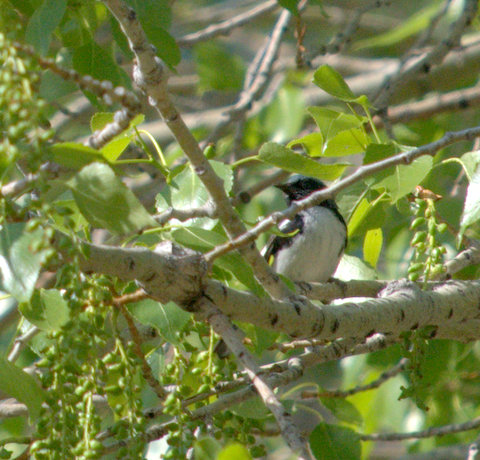 If you think you’ve spotted a bird out of place, the best approach is to attempt a photo. It doesn’t have to be a great photo, just one that shows a lot of field marks. Without a photo, all we have to go on is your memory of the bird.

Run the picture by another birder, preferably an experienced one. If your ID is confirmed, contact the group that deals with rare bird sightings in your state, and let them know. The ABA maintains a list of groups by state, and Cornell’s eBird has a list as well. Whatever you do, don’t delay! Migrating birds don’t often hang around for long.