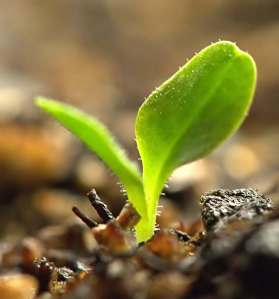 In spite of the snowstorms this week, spring really is on its way. If you’re starting seeds indoors, it’s time to be sowing tomatoes, peppers, and other crops that take about eight weeks to reach transplant size. (Hold off on the cucumbers, squash, and melons—here in Colorado they should wait until early- to mid-May.)

Even if you’re waiting for warmer weather to plant, you may already have your seeds. Just think—that one little envelope might hold hundreds of zinnias or carrots, or thousands of zucchinis (at least)! How does something so innocent and seemingly lifeless turn into a magnificent flower or an overabundance of squash? How does that seed know to bide its time until it’s planted? What actually happens down there in the dirt?

As I mentioned in my last post on seeds (see “Seeds: Plants in Suspended Animation“), seeds are tiny embryos, plants in suspended animation, just waiting for the opportunity to grow. It’s up to the gardener to provide the right conditions to break that dormancy.
Happily for us gardeners, most commonly grown vegetables produce seeds that are easy to germinate. (One exception is lettuce, which we’ll get back to in a bit.) Perhaps that’s one reason these crops make up a large part of our food supply. All they need is water, air, and the right temperature.

When we bury a seed in the soil—or place it on a damp paper towel, or on a bed of gel—it starts to absorb water. This is a passive process; even dead seeds soak up water. We can easily see this because the seed swells. What we can’t see is that the seed is taking in oxygen as well. The presence of water and oxygen inside the seed sends a signal to the tiny plant embryo that conditions are favorable, and it’s time to resume growth.

Some seeds, such as morning glories, have such a hard, thick seed coat that they require a prolonged period of damp soil to take in enough water. If we don’t want to wait that long, we can nick the seed coat with a knife, or use a file to create a thin spot. The seed will germinate much faster.

Now we come to temperature. Seeds that grow in warm weather will die if they germinate in the fall or winter, so they have a built-in thermometer. If conditions are too cold, they won’t germinate. Instead, they’ll lie in the ground, soggy, waiting for spring. Often, they rot before they can grow, which is why we don’t want to plant too early in the season.

Similarly, if temperatures are too hot, the seeds won’t germinate. If you’re an annual who needs a long growing season, hot temperatures tell you that it’s mid-summer. It’s better to wait until the following year than to sprout now and die before you can reproduce.

Lettuce is one crop that will not germinate in hot soil. The seeds become dormant, and will wait until they are chilled, then rewarmed, before they start to grow. If you mid-summer lettuce isn’t coming up, try placing the remaining seeds in the refrigerator for a month, then sow them indoors where you can keep temperatures below about 80 degrees, or shade the seedbed. You can see the optimal temperature range for other crops here.

Many perennial flowers, shrubs, and trees require a period of winter chill before they will germinate. This prevents the seeds that mature at the end of the summer from immediately sprouting. (See “Giving Your Seeds the Cold Shoulder”).

Light can also affect germination. While most seeds aren’t fussy, some (pansies, for example) require complete darkness,  ensuring that they’ve been buried. Others (such as geraniums and lettuce) only germinate in the light. It’s important to know which is which, and plant them accordingly. The directions on the seed packet will steer you in the right direction, or you can look here.

Once the seeds are convinced that it’s safe to grow, the seed coat breaks open. The embryonic root will emerge, anchoring the seed in the soil and allowing it to twist and turn so that the seed is oriented properly. The root hairs also enable the baby plant to more easily absorb water.

Note that once the germination process has begun, the plant is committed to continue. If the seed dries out at this point, it will die.

After the root has emerged downward, it’s time for the shoot—the stem and leaves—to reach for the light. The seed contains starch, which (converted to sugar) has been providing the energy needed for growth. Eventually that food supply will be used up. It’s time for the shoot to turn green and begin to photosynthesize its own food. Seeds planted too deeply will die of starvation. A good rule of thumb is to place the seed as deep as four times its diameter (unless, of course, it needs light).

If this all sounds complicated, remember—your seeds want to grow! They’re just being finicky because they want to succeed.