“You can’t always get what you want…”
“I heard that there two Spotted Owls are being seen in New Mexico. I’m going to go look for them—do you want to come? How soon can you leave?” My friend Susan (left) had done a Big Year last year, but she was still missing this species and was keen on adding it to her North America life list.

I reread her text. What she was really asking me was, do I want to drop everything, pack an overnight bag, drive six hours, then hike down a steep trail in the hopes that we will be able to locate an owl that looks just like the tree it is sitting in?

Happily, I didn’t have anything mandatory scheduled for the next 30 or so hours. I knew that it was highly unlikely we’d find these elusive birds, but what the heck—nothing ventured, nothing added to my life list!

“But if you try sometimes well you might find…”
Ninety minutes later I was parking my car in my friend’s driveway and transferring backpack, binos, a pile of outerwear, small cooler, and copious amounts of camera gear to her SUV.  Then we were on our way south.

I won’t give you a detailed account of the drive to the owl’s location. Let’s just say that it was fairly boring, but at least we had each other’s company. Susan had directions from a photographer who had posted some pictures of the owls, and we eventually pulled into the trail head parking lot. It was now late afternoon, a good time to look for owls. The day was brisk but clear, but a winter storm warning had been posted for later the next day.

Tying my jacket around my waist and shouldering my camera gear, I followed my friend over the side of the canyon and down a steep, rocky path. Pine needles and a thin layer of dirt and gravel overlaid the smooth rocks we were walking on, making the trail disconcertingly slippery. I tried not to look over the edge at the canyon floor several hundred feet below.

Although we had excellent directions to the trailhead, things became quite muddled from that point on. Official trails crisscrossed random “social” trails, and we were often unsure which way to go. We wandered back and forth, trying to reconcile our instructions with the reality of numerous trails. Our guide had written something about going down the switchbacks, then bearing east. Which switchbacks? And which fork was the one we were supposed to go east on?

Running into some local mountain bikers, we asked if they knew where the owls were. “Aren’t they at the canyon bottom next to some rocks and fallen trees?” There were a lot of rocks and fallen trees. Someone else knew of a local birder who might know something, and give us a phone number to try in the morning. That was promising.

Two hours later, we hadn’t spotted any owls—Bushtits, chickadees, House Finches, woodpeckers, crows and ravens, even some Wild Turkeys, but no owls.

It was getting dark and we were getting very hungry. We huffed and puffed our way back up the canyon wall and headed off to dinner and our overnight accommodations. 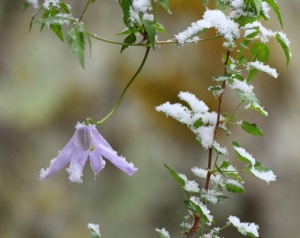 The next morning we were up at dawn. A glance out our window told us that the winter storm had arrived. Still, we called the number we’d been given and got some new directions to where the owls were being seen. Soon we were back at the canyon, again sliding our way down a trail made even more treacherous by the accumulating snow. Following our new instructions, we aimed for spot past where we had explored the previous evening. Here, the canyon closed in and the Ponderosas and firs were crowded together. Chokecherries and mountain mahogany filled in between the evergreen trunks, and delicate wild clematis twined over rocks and logs.

The storm picked up, making it difficult to look upward into the trees.. Each snow-covered branch presented the perfect place for a well-camouflaged brown owl with white spots to hide. We scanned every tree, taking our time, but no owls popped up. By mid morning, cold, wet, and discouraged—and growing concerned about road conditions for our drive home—we finally decided to give up the quest.

“You get what you need.”
As we headed north once again, I considered our disappointing birding trip. No, we didn’t find any Spotted Owls. But—we did spend several hours in a gorgeous canyon, enveloped by nature.

I enjoyed the glimpses of the birds we did see, along with the other wildlife—several species of squirrel, including this Tassel-eared Squirrel, and some scurrying lizards. Standing in the falling snow was magical, with the hushed flakes making their soft landings on the branches overhead as well as on my shoulders and glasses. We even got a good workout on the steep trails.

With so many hours together, I got to know my friend a bit better, something I’d been wanting to do. And finally, the break in my everyday routine was just what I needed. In spite of our failure to see a Spotted Owl, I’d say the trip was a success!
_____
Last Monday’s quiz bird was a Ruddy Duck.

One thought on “Looking for Spotted Owls”