I admit it—sometimes I’m spoiled. It’s mid-winter here in Colorado, but we just returned from a road trip to Florida, courtesy of an invitation from some much-appreciated friends. Even on the coldest days, the beach was so much nicer than the snow arriving at home!While Florida is full of amazing places to go birding—bird sanctuaries, wildlife refuges, Everglades National Park—there was someplace I wanted to be even more than the local swamp. Our hosts were renting a beach house in New Smyrna Beach, a small town along the Intra-costal Waterway just south of Daytona. A bridge connects the island to the mainland, with resorts at the north end and part of Canaveral National Seashore at the southern tip.

We drove in after dark, but as soon as the new day dawned, I was out the door to spend the first day of our visit at the beach. There’s something about pounding surf, sand, and an expanse of water reaching past the horizon that puts the rest of life in its place. I grew up near the beach, and it still feels like home.

On this day, the brisk winds and (relatively) cold weather that had prevailed for the past several weeks finally abated. The sun shone, the warm air tickled my exposed knees (imagine wearing shorts in February!), and it was everything I had been anticipating.

Brown Pelicans soared up and down the beach, reminding me of platoons of soldiers in their orderly formations. Interspersed between the flocks of pelicans Osprey soared on the light breeze.

Gulls, primarily Ring-billed, wove over the breakers, searching for anything edible. A few Laughing Gulls were beginning to regain their black heads, a sign that spring is coming.

It was this Greater Black-backed Gull that put on the best show. Soaring over the mounding breakers, it suddenly dove into the water. A moment later, it surfaced with a good-sized fish, which it then proceeded to eat back on the beach. 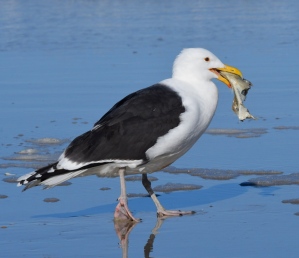 The gulls were joined by Forster’s and Royal Terns, still dressed for winter. 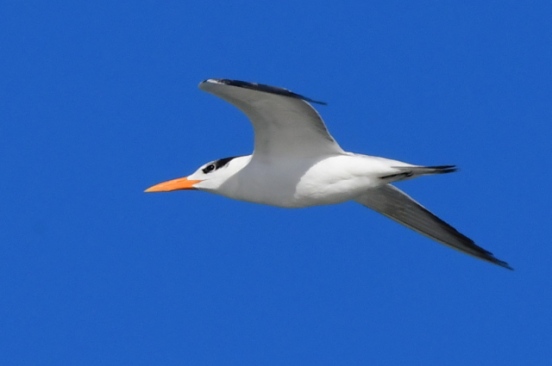 Double-crested Cormorants bobbed and dove for fish. Further out, close to the horizon, I spotted a steady stream of Northern Gannets. I was confused by the dark plumage of most of the geese, but then realized that they were young birds. But whether dark or light, they were easily identifiable by their distinctive plummeting dive.

My neck protested that I’d been looking upward too long, so I turned my attention to the shorebirds probing the wet sand. Most were Sanderlings, who played tag with the waves, rushing out to nab a snack before the in-rushing foam chased them back to higher ground.

Willets searched slightly deeper water, willing to get their blue-gray legs wet, at least up to their knees. 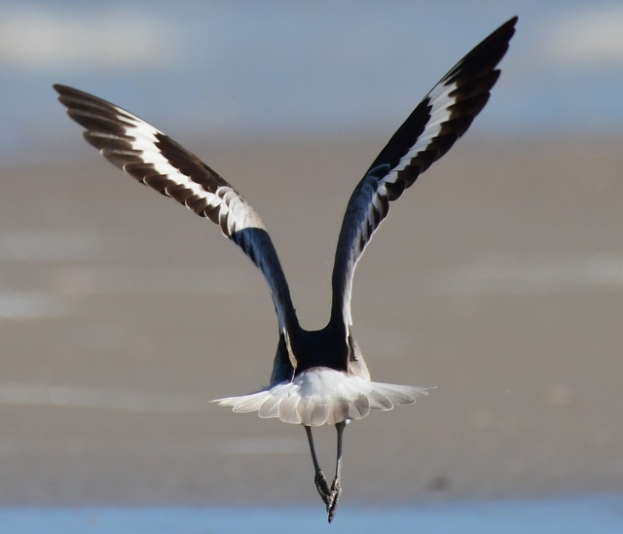 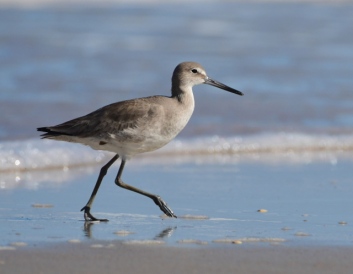 Ruddy Turnstones were distracted by any jetsam left by the high tide, inspecting each clump of seaweed or grass for whatever tidbits they could grab. Someday I hope to see them in their bright breeding plumage.

Another highlight was this pair of Snowy Egrets. I certainly didn’t expect to find egrets playing in the surf!

I had a brief moment’s panic when I realized that I’d walked far down the beach. Every house had a back deck and wooden stairs down to the sand—and didn’t have any idea which set of stairs led back to the house we were staying in. Moreover, it had been dark when we arrived, and I hadn’t even noted what color the house was! Thankfully, I had my phone with me. Look for the red beach umbrella. Got it!

I was now firmly settled into “birding vacation” mode and looking forward to the next day, when we planned to visit one of my favorite birding destinations, Merritt Island NWR.