In spite of this week’s blizzard, spring is almost here, and soon we’ll be seeing bright yellow flowers filling the lawn or growing in a crack in the sidewalk. Dandelions—you either love them or you hate them, but it’s hard to ignore them.

The plant most of us call a dandelion, Taraxacum officinale, isn’t native to North America, but rather arrived from Europe with the first white settlers. However, there are other related species that are native wildflowers. Most natives lack the toothed leaves that gave dandelions their common name. (“Dandelion” is derived from French for “tooth of the lion.”)

This photo of a field of dandelions was taken in the Rockies, near Leadville, Colorado. It’s pretty, but the invasive plant has completely overtaken any native vegetation.

Dandelions are members of the sunflower family, Asteraceae. If you look closely, each flower head is actually comprised of a lot of tiny florets, crammed together. Each petal represents a single floret.

Dandelions are well suited to survival in the toughest of places. The perennial plants have a long tap root that not only anchors them firmly in the soil, but gives them impressive drought tolerance. Any gardener knows that pulling off the top of the plant merely sets it back a few weeks, as new growth immediately sprouts from any root portion left behind.

Once the flowers appear, even pulling doesn’t stop the formation of their familiar seed heads. Plants left wilted on the ground (or casually tossed into the compost bin) will continue to mature that lifeline to the next generation. Those seed heads are the poster child for wind dispersal—one puff and the air is full of hundreds of tiny parachutes, all bearing a new dandelion to its forever home. And who can resist blowing on them in the first place? 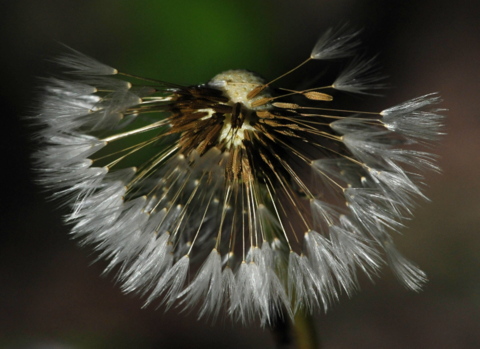 While dandelions ruin the perfect lawn, and often crowd out native wildflowers, they do have a few redeeming qualities. For one, all parts are edible. You can toss the leaves into a salad or add them to a stir-fry. The flowers are sweeter and less bitter, and can be eaten raw or cooked—or made into dandelion wine. The roots also have medicinal properties.

You may have seen the meme going around social media every spring about leaving the dandelion flowers to feed the pollinators. There is some truth to that. Because they bloom so early in the season, they do provide nectar at a time when few alternatives are available. (Of course, the insects were here in North America before the dandelions arrived, so I find it hard to believe that they must have dandelions to survive.) And as you can see, birds eat the seeds.

If that isn’t enough to convince you to let the dandelions bloom—if, for example, you’d prefer some variety in your landscape—there are some things you can do to keep the population in check. Hand pulling (you need a tool to dig down to the bottom of the root) can be an excellent way to work out your frustrations .

Or, you can try “frustrating” the plants—repeatedly removing the food-producing top growth until the root starves. This approach usually succeeds at frustrating the gardener.

You can mulch them, cutting off the sunlight and thus the leaves’ ability to photosynthesize. Mulch also prevents new seedlings from sprouting.

If you’re dealing with a lawn, keeping your grass a bit longer lets it shade out new seedlings, and thick turf blocks the seeds from reaching the soil where they can germinate.

Finally, herbicides can work well. Lawn “weed and feed” products often contain a broad-leaf herbicide that kills dicots (such as dandelions) but not monocots (i.e., grasses). Homemade weed killers (such as those containing vinegar) may burn the leaves and appear to be effective, but they won’t kill the root, and your weeds will soon be back.

Whichever method you use, you can be assured that you may win a battle now and then, but you won’t win the war. Dandelions are well established in North America, and are here to stay.