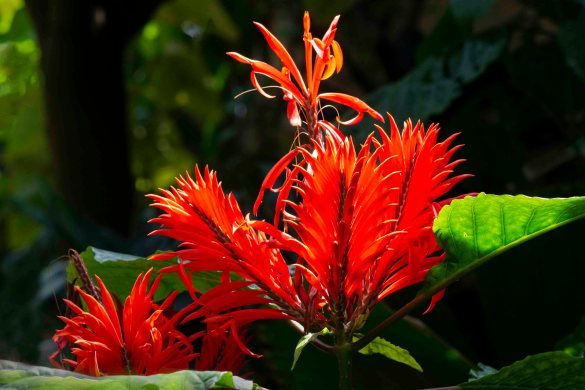 I love Asian cooking, or at least the American version of it. (I didn’t recognize anything on the buffet at the hotel in Bangkok!). Anything with plenty of onions, garlic, and ginger makes my mouth water. I’ve grown onions and garlic before, when I had more room for such things. But living in the cold part of Zone 5, any ginger I planted would have to be in a pot so I could bring it in for the winter. And at the rate I use ginger, it just didn’t seem to be worth the trouble.

Then, while visiting a conservatory full of tropical plants, I saw some flowers labeled “Ginger” and started to wonder—is this the same plant? How can I have some of these stunning blooms in my house?

It turns out that the ginger we usually eat, Zingiber officinale, is only one out of over 1,600 species, organized into about 50 genera. Many of these other species are also edible. You may recognize some other Indian spices, such as turmeric (Curcuma sp.), cardamom (Amomum elettaria), and, if you enjoy making Indian recipes, galangal (Alpinia galangal).

Then there are the pretty gingers. Wikipedia lists several: “shell gingers (Alpinia), Siam or summer tulip (Curcuma alismatifolia), Globba, ginger lily (Hedychium), Kaempferia, torch-ginger Etlingera elatior, Renealmia, and ginger (Zingiber).” Yes, the one we eat has a very nice, blossom on it, but there are others that are much more interesting and/or attractive. 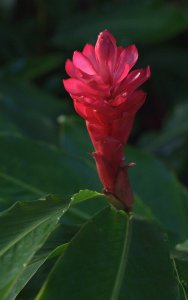 I am particularly taken with some plants described as Red Ginger (right), which is the common name for either a cultivar of culinary ginger with red roots, Zingiber officinale var rubrum, or a completely separate species, Alpinia purpurata. As far as I can tell, the flowers look identical. Confusing, anyone?

As is the case with many other plants, notably the Euphorbias, the colorful “petals” of many ginger flowers are actually bracts, and the true flowers are rather inconspicuous. Do you notice how the white flowers resemble orchids? No, they’re not related, but they have the same sort of symmetry. It’s too bad they’re so small.

Then there are the plants we call gingers, but which are in a totally different family. One example is Blue Ginger, Dichorisandra thyrsiflora, which is actually a type of spiderwort!  (If you look closely at the flowers, you can see that they have three petals, not bracts.) Blue Ginger grows throughout the tropical parts of the Americas and thrives in warm greenhouses, but can’t tolerate freezing.

We keep our house pretty cool in the winter, setting the daytime thermostat to 64° F., and letting the temperature drop into the 50s at night. Plus, indoor humidity hovers around 20%. Will any gingers tolerate such un-tropical conditions? Well, a lot of online sources seem to think so. None of them were from a science-oriented author, however, so it seems there’s only one way to find out.

While grocery store ginger roots are often treated with a growth inhibitor, the word on the web is that you can soak the tubers for a few hours and it will wash off. Then you simply plant the tuber, making sure it’s in good shape and has several eyes—much like planting potatoes. Stick it in the warmest part of the house, keep it damp but not soggy, and you should see sprouts in a few weeks at most.

I’m going to give it a try. Somewhere down the road, I’ll let you know how it goes.